Firmin have become the newest member of the growing Pallet-Track network.

As a leading provider of road transport, distribution and logistics services throughout Kent, the south-east, the UK and Europe, we have now joined Pallet-Track as part of our long-term strategy to further develop our business during 2017.

Paul Denyer, Director, said:  “We are pleased to be joining Pallet-Track as a shareholder member as it is of one of the UK’s leading overnight pallet networks.  This exciting new move will enable us to continue to provide a comprehensive solution for large and small consignments whilst maintaining the high standards of quality and service that our customers have come to expect.”

Nigel Parkes, founder and managing director at Wolverhampton-based Pallet-Track, said: “Firmin Transport joining Pallet-Track is a significant coup for us. It is major player in Kent and the south-east and it brings with it a rich history and innovative ideas for the future, not only for the network, but also the industry, all of which will complement Pallet-Track.”

We are the fifth new member this year which represents a great end to 2016 for Pallet-Track, which has even more ambitious plans for next year.

Service Schedule Over the Festive Period

Our Environmental system has been designed and updated to meet the requirements of the new ISO 14001:2015 standard.  Following a re-audit by BSI we are pleased to have passed and been awarded the new Environmental standard.

We are now in the process of reviewing our Quality Management System and transitioning towards to the new ISO 9001:2015 standard.

With the threat of morning rain disappearing, the competitors were left with near perfect conditions for their finals in the afternoon at the Sittingbourne circuit.

The two Honda Clubman pre-finals were won by our very own Alfie Brooks.  The second of the pre-finals had been a bruising affair, and an explosive final was on the cards. At the front Brooks broke clear leaving behind a battling bunch of at least 6 karts, which conducted a race long duel to the finish. Brooks was overtaken for a period near the end, but as they crossed the line it was Alfie celebrating the win.

A few more rounds still to go, but it’s looking good for Alfie standing 80 points clear on the table. 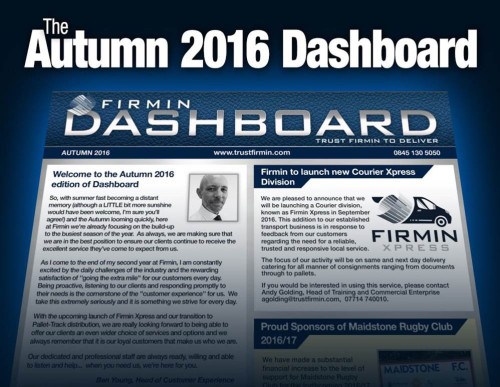 Hot of the Press… Our Autumn Dashboard!

Click below to read our latest edition of Dashboard and find out about what we have been up to, including some exciting new projects… 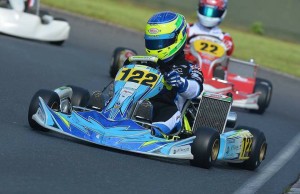 Last weekend saw Round 5 of the PFI Club Championship in Lincolnshire, and the final weekend of practise before the last round of the British Championship. Friday was a useful day testing with it being dry all day and both Edward and I posting competitive times against one of the top grids in the country.

Saturday however saw two dry sessions followed by torrential rain for the rest of the day. Ed carried on testing for the afternoon but I decided to sit it out due to Sunday’s weather being dry. Sunday came and qualifying was a difficult session and I ran in about 12th out of 55 until I made a few mistakes in the closing minutes and ended up 21st.  Ed managed a good lap to finish 22nd.

Both the heats where messy with crashes near enough every lap and we were caught out with slow starts which resulted in us qualifying for the B final, however there was a lifeline with the top 4 from that race qualifying for the A final.

Ed’s race was going well until an incident saw him out of the race.  I had a good race, competing against some of the best in our class and I ended up finishing 4th to secure a back row start in the A final.

The A final was a race full of incidents but I managed to have a good race to move from 36th to 25th. We were both pleased with our speed which should see us in a good position for the last round of the British Champs.

Come and see us at Truckfest!

The Firmin team will be at Truckfest again this year showcasing our fleet.  The event takes place at the Hop Farm on 3rd – 4th September.  If you’re down there pop along and see us! 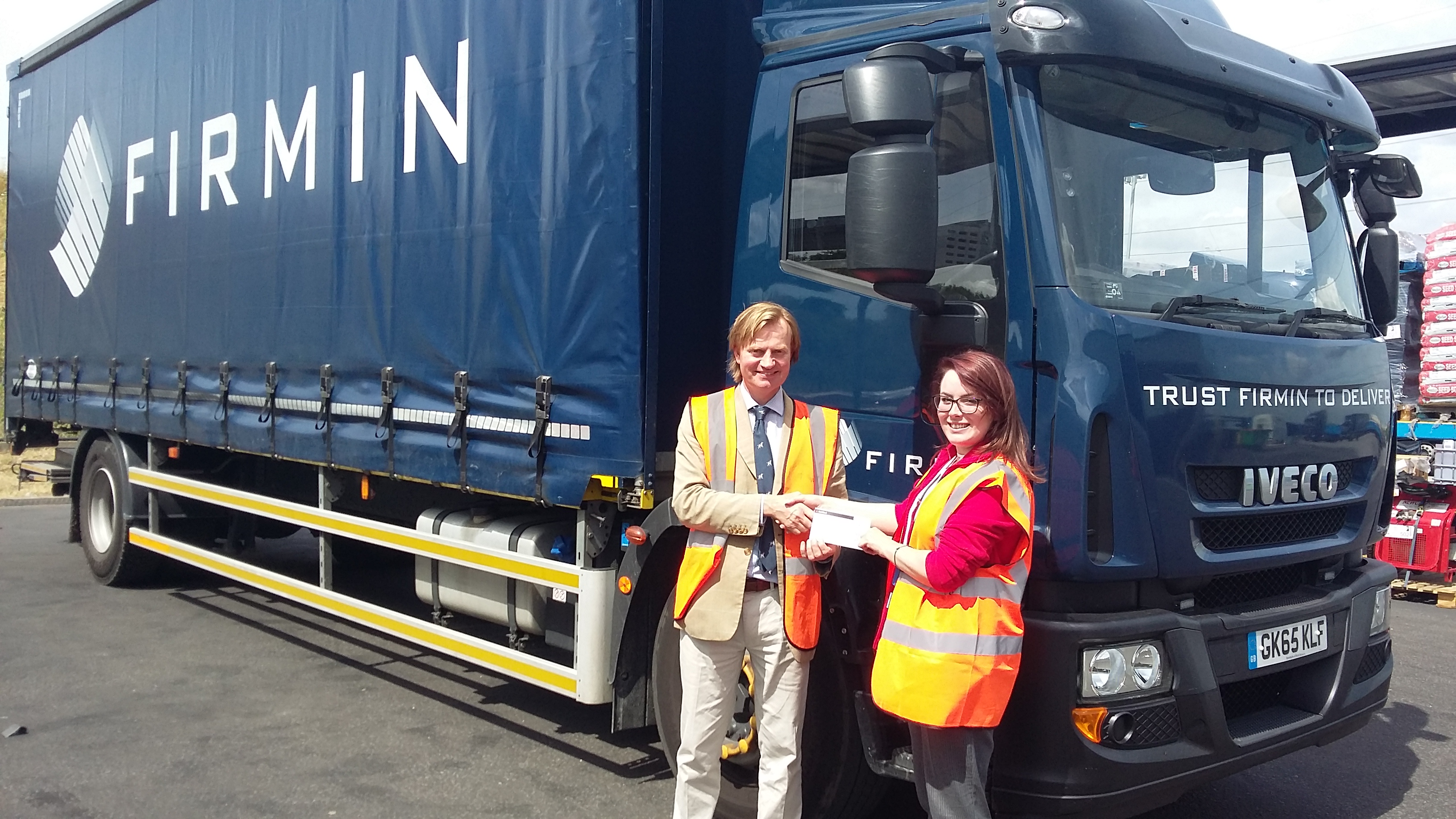 Our nominated worthy cause for April to June was Demelza, a children’s hospice charity in the south east providing a wide range of services to children with life limiting illnesses and their families.  The charity relies completely on sponsorship and volunteers to be able to offer the valuable support.

We were delighted to donate £768.70 for Demelza which will go towards qualified nurses who provide 24 hour care to the families and the children. 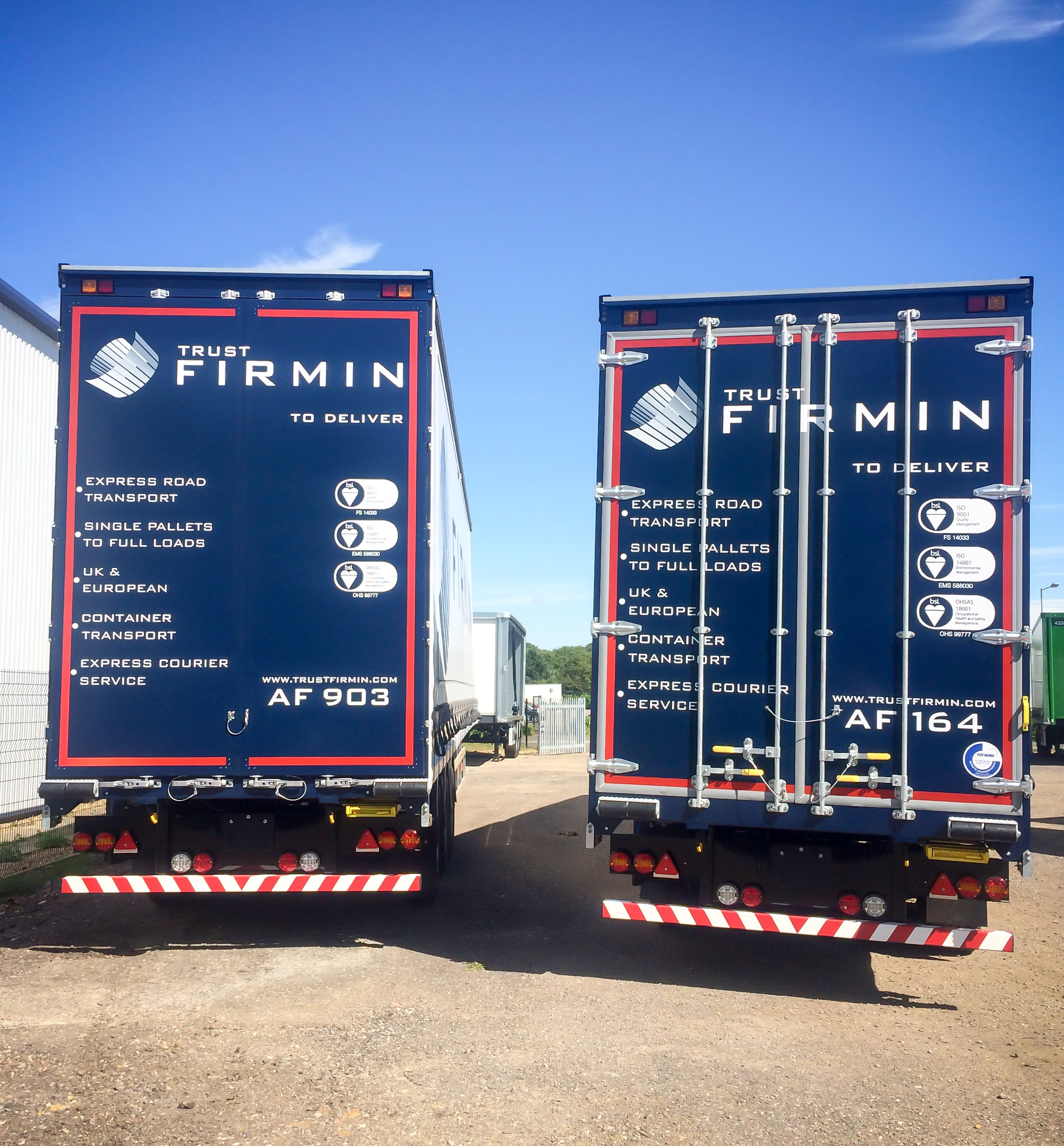 Check out our new trailers!  We are excited to soon be taking delivery of 24 smart new 15’5″ trailers. 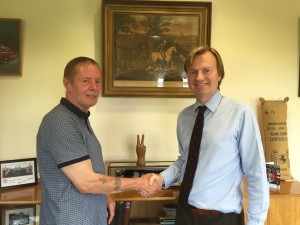 Congratulations to Mick Griffiths who reached his 25 years service milestone on 1st July.

Mick joined the company as an LGV driver and now works as a Warehouse Operative at our depot in Kemsley.

Mick was presented his Long Service Award at our Head Office in Linton by Michael Firmin. 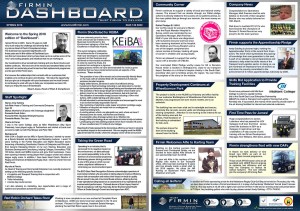 Click below to read our latest edition of Dashboard and find out about what we have been up to, including some exciting new projects…

Spring Edition of Dashboard – Hot of the Press! 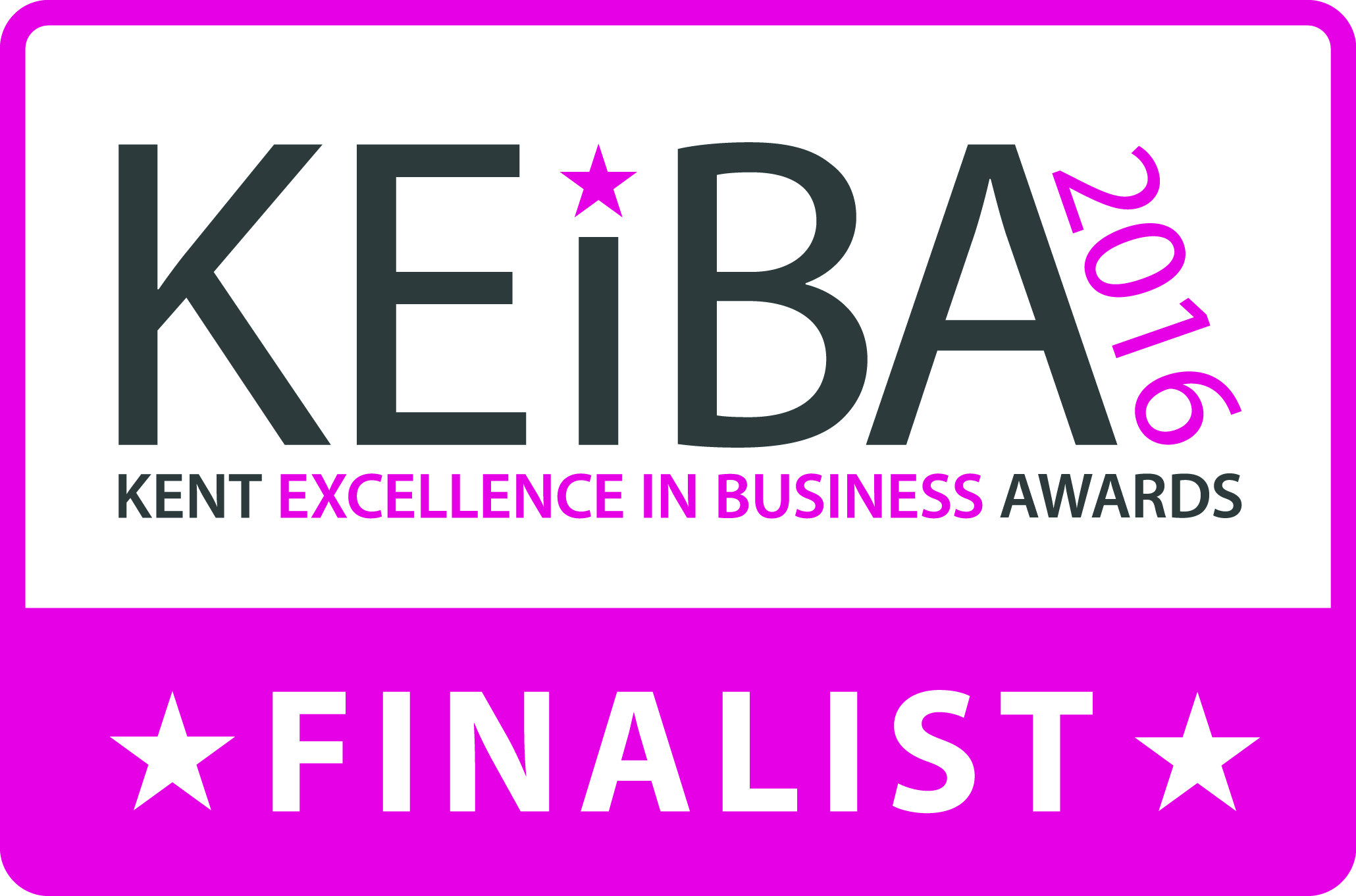 We are extremely proud to have been announced as a finalist in the Business Commitment to the Environmentcategory of the Kent Excellence in Business Awards.

Reaching the finals represents the tremendous effort by our team in reducing our business impact on the environment through the implementation of various schemes, initiatives and policies.

The category winner will be announced at a gala dinner on 23rd June. 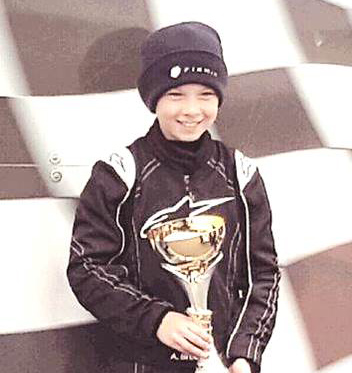 Another Trophy for Alfie!

Well done to Alfie Brookes who took first place in the Honda Cadet Clubman at the ‘O’ Plate meeting held at Bayford Meadows in Sittingbourne at the weekend.

It was a great day with an appearance from 4 time British Superbike Champion Shane Byrne, who arranged for all the young racers to line up on the track so he could shake their hands and wish them luck in their final race. 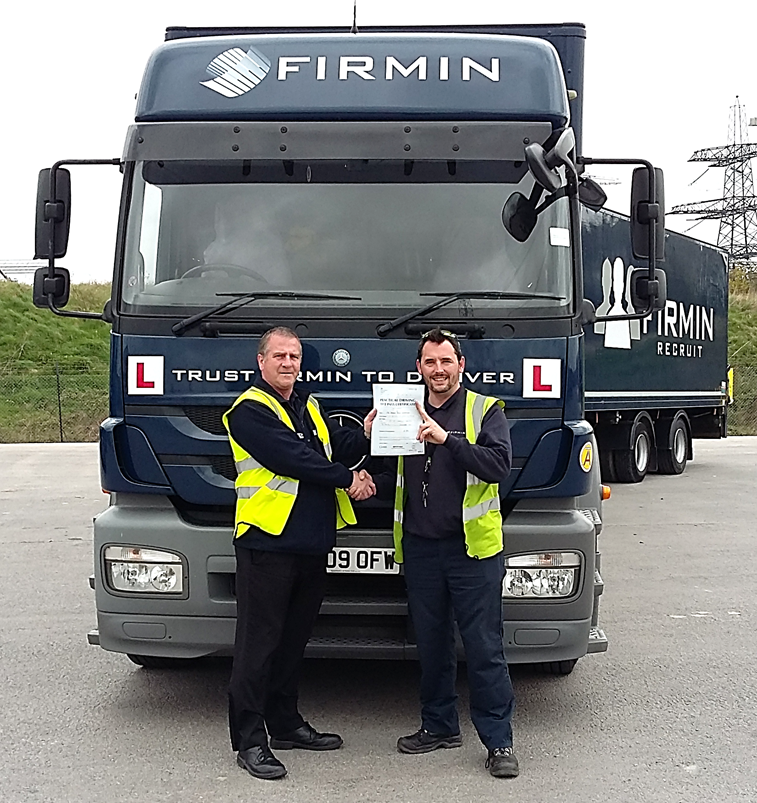 Huge congratulations to James Lelacheur who has passed his LGV Category C+E test, first time!   James joined the business in 2014 as a Category C rigid driver and has undertaken a 4-day course of artic training with our Driver Development Manager, Ken Williams. 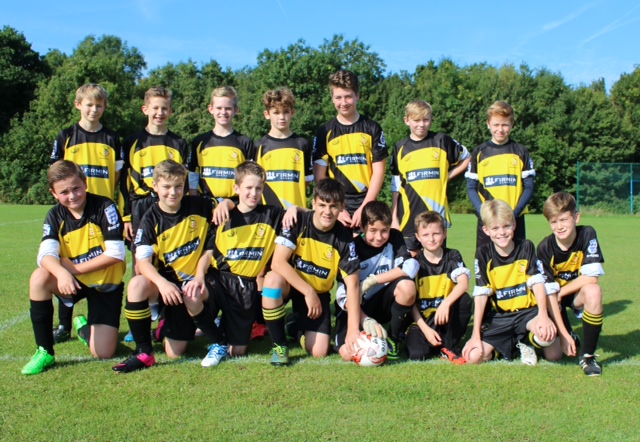 Huge congratulations to James Lelacheur who has passed his LGV Category C+E test, first time!   James joined the business in 2014 as a Category C rigid driver and has undertaken a 4-day course of artic training with our Driver Development Manager, Ken Williams.

We are thrilled to have been shortlisted for the Kent Excellence in Business Awards (KEiBA) in the Business Commitment to the Environment category.

We will soon be interviewed by the judges of this category and will then wait to see if we have reached the final stage which is expected to be announced in May.

The awards attract a wide range of entries from across a variety of sectors and the shortlisting represents our efforts in reducing our impact on the environment through the implementation of various schemes, initiatives and policies.

Over the winter months Chris and Ed Bridle have been busy undertaking a lot of testing, getting ready for the summer and making sure they are on the front foot ready for the start of the season.  The boys have been competing in the Buckmore Park Winter Championship and they also took part in the Gerry Lilley Cup at Bayford Meadows in which Ed took first place with a comfortable win.

On 12th March the boys attended the Buckmore Park awards in which Chris collected the Senior X30 Summer Champion trophy and his award for 5th place in the Kent Champs.

New recruit to the Firmin sponsored karting team, Alfie Brooks, participated in the Honda Cadet Clubman (HCC) class.  He didn’t get away to the best start and the race saw the lead change hands several times.  However, while all this was going on, Alfie was steadily making his comeback drive which was nothing short of awesome.  His competitors didn’t see him coming and he slipped ahead on the ninth lap and went on to take victory by less than a second.